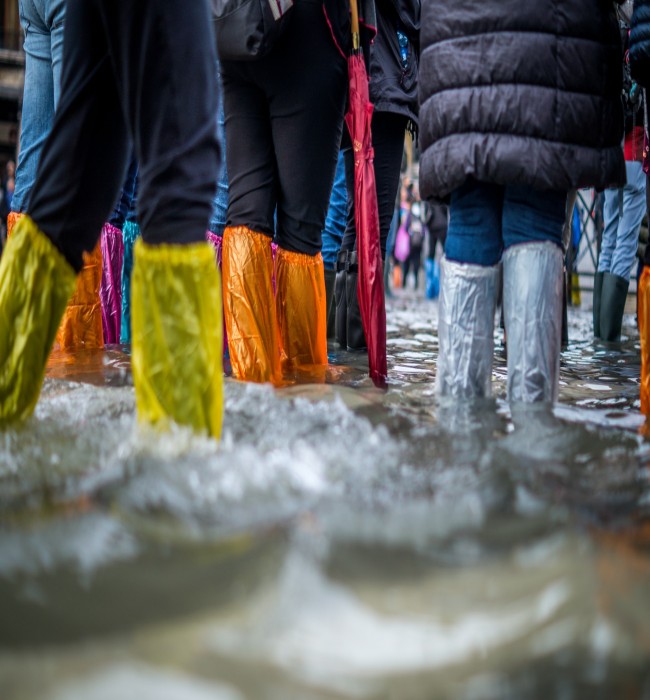 Disaster Management was always a vague term. It does not refer to any specific nature of disaster nor about effective ‘management’ of disaster (whatever that may mean). If I lost my house in a cyclone it is a disaster all can see, but if I lose it in a cards game, for me the disaster is just as stark, only difference being it is one that only I can see. Normally, earthquakes, fires, cyclones, floods or major vehicular accidents and similar calamities count as disasters that squarely come under the ‘Disaster management’ phrase. But now, with the global Corona Pandemic, nature itself has shifted the goal posts and mankind is scrambling to redefine the already vague meaning of the term.

Those who count as disaster management experts or volunteers or personnel, are now learning about how to ‘manage’ a pandemic along with the more conventional ‘disasters’ at the same time. It is a tough task any which way you choose to view it.

Experts at a webinar on tackling simultaneous disasters like super cyclone Amphan and Covid-19, underlined the major risks involved in handling of such multiple emergencies. They mostly stressed on the need for effective implementation of stringent rules and regulations while participating in an event that was organized by the Centre for Disaster Management Studies (CDMS), Guru Gobind Singh Indraprastha University.

Chairing a state-level natural disaster committee meeting, Chief Minister Naveen Patnaik instructed the officials to strictly follow the Standard Operating Procedure (SOP) to tackle natural calamities. The Chief Minister emphasized on advance planning, quick rescue and restoration efforts to deal with natural calamities. “The state government has taken several result-oriented measures to lessen the threat from natural disasters. Our preparedness should be dynamic, collective and participatory in nature,” he said. Stating that Odisha remains the first state to institutionalize community-based preparation, he said, “Our experience in community-based management has been also helped a lot in Covid-19 management.”

As a blogger put it:  We have seen in recent disasters the inability to predict the incidence of mudslides or the amount of water to be held or released in dams during heavy rains — whether in Mumbai, Kerala or Chennai in recent years. The ferocity of volcanic discharges recently in the Philippines and New Zealand surprised many scientists and earthquakes continue to surprise us with their relative unpredictability.

Will the water from melting glaciers or rising ocean levels suddenly assume more catastrophic dimensions or smaller events like lightning incidents assume more alarming proportions in the coming days? The ability of disaster management authorities to reasonably predict or anticipate such calamities would be put to test in the days to come.

Patna, June 26: A sudden spurt in incidents of lightning strikes in Bihar has alarmed the disaster management authorities who have advised the masses to take extra precaution during the monsoon rains. What is strange, the number of casualties has been rising each year despite the authorities launching aware campaigns and issuing frequent advisories.

Only yesterday, more than 100 people were killed in possibly the severest-ever lightning strikes across 23 districts of the state. A majority of 13 deaths were reported from Gopalganj, followed by 8 each in Madhubani and Nawada, 6 each in Siwan and Bhagalpur, 5 each in East Champaran and Banka and the rest from other districts.

Reports said the casualty figure went very high this time since the majority of the villagers were working in the farmlands with monsoon arriving on time and the paddy transplantation season in progress. Majority of the villagers didn’t even get time to escape from the scene and were simply caught unawares as thunderstorms accompanied with the heavy rains lashed the region.

It is supreme irony that at a time when mankind has breached dizzy heights in technology and scientific advancement and the world has become a virtual village, the Corona pandemic has pushed him into a hole from here he is unable to climb out. A bug unseen, unknown has brought the world’s superpowers to their knees and powers small and big are equally helpless as the numbers swell and bulge every day.

While all the brave warriors are out there wearing PPE to help and bring relief to the common people by way of food supplies, medicines and other basics, scientists and bio-medics are struggling to find a cure or an antidote to Corona. But every now and then, a cyclone Amphan or lighting strikes or flash floods add on to the problems and the disaster management effort is pushed back by days and weeks in one stroke.

All I can say in conclusion is that disaster management needs a clear description desperately today. It needs to notify specifics and clear goals and targets. It needs to factor in all the possibilities and somehow write out a roadmap for people to follow up on. Many good hearted and brave folk are out there to do their bit to help out. They need to train and learn about how to manage disasters and do their best to save lives and properties.  They are ready and prepared and they need to be encouraged in these desperate times. But for that to happen someone or ones, need to bell this cat called ‘Disaster Management’ a child desperately seeking a worthy father.